Nocturna is the only female mutant that seems to appear in the series and serves Dread Wing in the promise she will rule over a land of her own.

Her chance comes when Dread and Nocturna invade the oasis and he gives her the offer of ruling the oasis in enchange for her continued loyalty to him. Although she is enraged when Dread Wing and his dragon destroy the land.

Like most mutants she has the ability to span wings and take flight. Her main assets in combat apart from her accuracy with a canon are her agility and her claws. She also seems to be trusted by Dread to act as a diplomat with the others clans ; but most of the time, she is spying the Dragonators seeking Amber.

Nocturna seems to be the natural commander of the Gremwings, as she is the only one to understand their language and has to translate their reports to Dread Wing.

Alike the other females in the series (Nora and Apex), Nocturna doesn't allow anyone to treat her or even imply she is weak. She will almost cut Dread Wing's throat early in the series to show him her limits. This doesn't prevent her from acting and speaking as a typical Femme Fatale.

It is noticeable that Nocturna seems to be closely interested in Z'neth. Twice, she will indeed save his life by sparing him without any obvious reason - apart from her mood - and will come once to him when in trouble to offer an alliance against Dread Wing.

Her dragon is unnamed but bears a strong resembalance to her skin colour cyan. 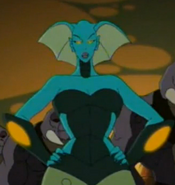 Add a photo to this gallery
Retrieved from "https://dragonflyz.fandom.com/wiki/Nocturna?oldid=4131"
Community content is available under CC-BY-SA unless otherwise noted.