In the distant future, humankind has risen above the Earth, creating a new world where man and dragon live - and fly - as one. When their sky world is threatened by Dread Wing, self-appointed lord of the netherworld, only one family can protect it from destruction with the aid of their mighty dragon steads. Three heroic brothers and their valiant sister who carry the noble name of Dragon Flyz! 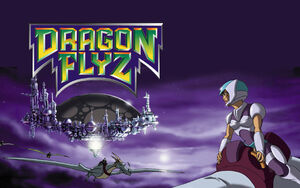 Dragon Flyz is an animated series and toyline from the 1990's and 2000's which features a family of flying Dragonators in a post-apocalyptic world ruled by dragons. It was created alongside the female-centric series Sky Dancers and ran for 26 episodes, with several flying action figures created as a tie-in.

Community content is available under CC-BY-SA unless otherwise noted.
Advertisement